Reading back through this blog, I've just come across  a post from August 2008 when I mentioned that we had just seen house sparrows in the garden for the first time.

Well, since then, they have become permanent residents, and are currently nesting in the roof for the second year. They can get through two fat balls a day, though are being helped in that task by the robins, blackbirds, tits, starlings, greenfinches and goldfinches. The chaffinches, dunnocks and thrushes haven't developed the technique of hanging on to the feeders, and wait on the ground for little bits that drop from above.

There's plenty of birds here now!
Posted by Richard Dorrell at 9:36 am 2 comments:

Two springs ago, there were so many cuckoos about that at least one of them was in danger of extermination for shouting it's 'song' for ages at first light every morning (that's about 4.00 am at this time of year...)

Last spring, we were really worried, as there seemed to be virtually no cuckoos calling at all.

So this year, I am happy to report that everywhere you go on the island, cuckoos may again be heard, and I don't really mind being woken up by them...
Posted by Richard Dorrell at 10:01 am No comments: 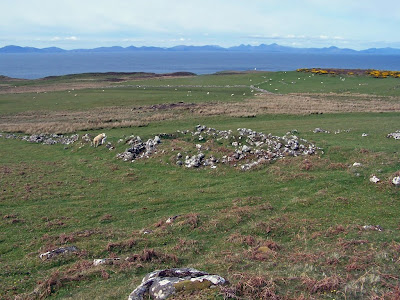 The tip of the Waternish peninsula, north from Trumpan, is uninhabited. It has a north west aspect and views over the Little Minch to the Outer Hebrides. It is not mountainous, but has a rounded hilly backbone. The hills are heather clad, and boggy on the tops. The peninsula is almost totally surrounded by sheer cliffs. Even on a calm sunny day you can almost 'feel' how remote and wild the countryside is.
And yet, in the 18th century, there was a farming township right at the exposed tip of the peninsula. Their township was called Bail an Tailleir, which translates as Tailor's Town. Today, the ruins have the name Unish.
There were 47 buildings and 15 enclosures in the township, and at least fifteen farmsteads. All around are extensive areas of lazy-beds. Unish is first documented when it was leased in life rent to Donald Macleod for 306 merks in 1708. In 1788 a report to the British Fisheries Society found 10 married couples, 17 children, 30 unmarried adults, and two widowed adults in a total population of 69. The clearance of the township was certainly effected by the time of the first edition of the Ordnance Survey  map of 1880, when only a single house was in occupation. 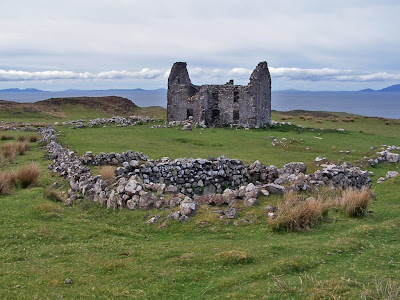 Julianne and John left a message on this blog a few days ago, re. http://skyecalling.blogspot.com/2009/11/do-you-fancy-living-on-skye.html and we would really like to get in touch. My personal email address is richarddorrell@aol.com . Hope to hear from  you soon!
Posted by Richard Dorrell at 7:11 pm No comments: 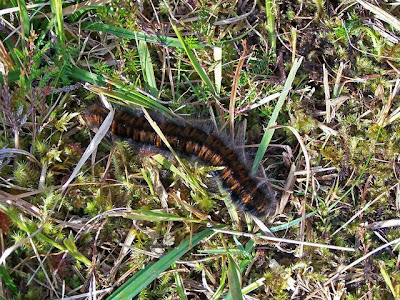 There's a few of these chaps about just now...
They are OK when you come across one on a path, but they are a bit vulnerable when crossing roads, as they can't run very fast.
The cabbages in the gardens don't need to panic, these guys eat heather. They eventually turn into a Northern Eggar Moth, which is a browny yellow moth with a wing span of as much as 9cm.
Heather must be more nutritious that it looks...
Posted by Richard Dorrell at 6:57 pm No comments:

Yes, Richard is making some real progress with the allotment.   With some wonderful warm sunshine a couple of weeks ago he spent hours out there digging the bottom section over.  It was hard work by all accounts but he still had a moment for a smile and a pose for the camera! 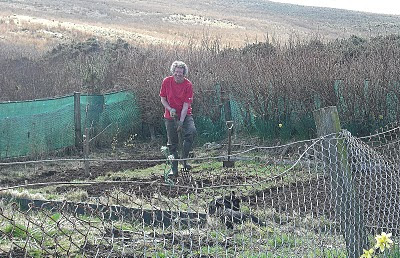 A few days later the fruits of his labour were quite evident.  Basil is shown here with Richard - by the side of the freshly dug plot.  The soil is wonderful and also very deep; great news as we have plans for a number of root vegetables including carrots, potatoes, swede, onions and Jerusalem artichokes!! 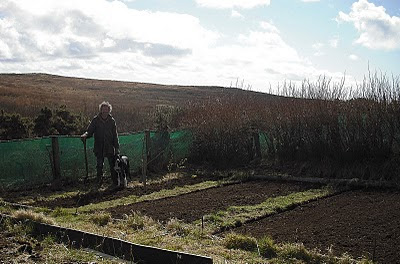 Meanwhile, spring is quite evident in the Roskhill front garden with our daffs fully open revelling in the bright sunshine and all that extra space that has appeared since I spent days out there getting rid of all those weeds!! 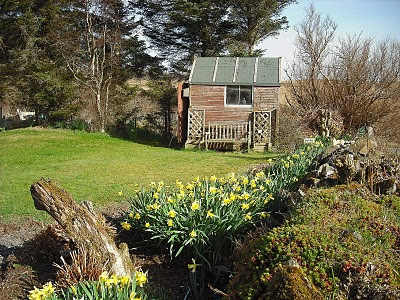 Four black sacks later the borders were looking a lot better following my battle to extricate nettles, ground elder, docks and dandelions.  Now it's just keeping on top of them throughout the next few months that is important..... 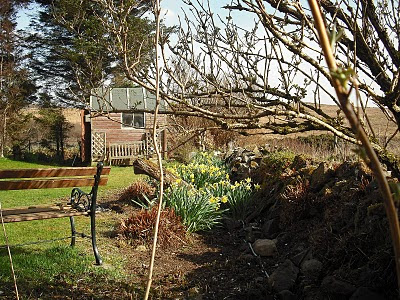 It's the 1st May, and a bank holiday weekend, and for the first time this year all three of our properties are fully occupied by holidaymakers. They should be having a good time today - the sun is shining, there are newborn lambs everywhere you look, and primroses in flower on all the roadside verges.

I'm just back from 'servicing' Rowan Cottage, and Sue is garden-tidying at Aird View. I need to get the lawn mown here at the Barn too, and then there's the seed potatoes on the windowsill waiting to be planted, and more ground to clear on the allotment.....

It's our busy time of year!
Posted by Richard Dorrell at 4:56 pm 2 comments: