Visitors often comment on how friendly everyone is on Skye. The cynic in me says that will be because those visitors are spending their money here and providing us with our income, so we need to keep them sweet… But then, thinking about it – we are a pretty friendly community. It is absolutely the ‘done thing’ to say ‘hi’ to everyone you meet, whether you know them or not (unless in a really busy place like the Co-op, and then you only say ‘hi’ to the several people you meet who you know). We smile a lot. We know all our neighbours. We help each other out when someone has a problem.

When I travel to the south of to connect with friends and family, it is most noticeable (to me) that when strangers pass on an otherwise deserted pavement, the ‘done thing’ is to determinedly avoid any eye contact, and to make no attempt at all at communication. I find it very strange to travel on public transport in the South, and see everyone plugged in to earphones and staring intently at little rectangles of plastic. No-one speaks to another person – heaven forbid!

Now, it is visitor season on Skye again. A couple of our neighbours in Roskhill offer visitor accommodation, so we have strangers wandering past our gate most days, as they explore the immediate neighbourhood. I always say ‘hi’ to anyone I see. Some look a little surprised, but they always say ‘hi’ back – and sometimes even pause for a brief chat.


It’s not so hard to be friendly.
Posted by Richard Dorrell at 7:53 pm No comments:

Cuckoo Update - And The Allotment

In may last post, I expressed my concern at the lack of cuckoos here this year. Seems like I was a bit ahead of myself - we are hearing a cuckoo every day now, and as ever, they are cheerfully waking us up at 4.00 every morning. Hmmm... However - I remain certain that there are fewer of them around this year than in previous years.

As to the allotment - we have been enjoying a period of dry and mostly warmish weather for the last few weeks. This has enabled me to get on with all the planting, and I am now pleased to report that I have peas, runner beans, broad beans, carrots, onions and potatoes all planted and, in some cases, showing above the ground. I also have baby plants of sprouts, broccoli and kale in the cold frame in pots, all waiting until they are big enough to be planted out. That just leaves the swede, which I will be planting in a few days time.

It's a lovely time of year on the allotment - as it all looks so neat. As the spring turns to summer, our very long hours of daylight encourage incredibly rapid growth of a jungle of weeds of all shapes and sizes. Having an allotment which borders rough grazing and open moorland doesn't help - as the unwanted plants all grow there unchecked and eagerly spread their seeds onto my carefully cultivated plots. Every year I vow that I will make a big effort to keep on top of weed control, and I haven't really won the battle yet... so maybe this year..? 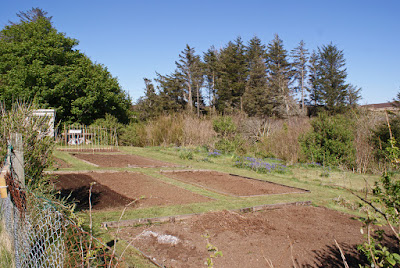 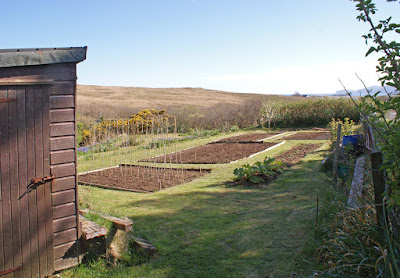 I enjoy bird song, and like to watch our garden birds, but I am far from being a fanatic, and struggle to identify any feathered friend which is 'out of the ordinary'. Serious bird people should consider redirecting to the excellent 'Skye Birds' website right now... http://www.skye-birds.com/

Now, with the serious twitchers gone, it's hello to you slightly less 'birdy' people...

Here at Roskhill, I have a couple of feeders dangling from a tree just outside my study window. The feeders contain peanuts and fat balls, and I very occasionally throw a few kitchen scraps on the ground beneath the feeders. In spite of Roskhill being a very small human residential community, lying within many acres of heather moorland and rough grazing, our garden attracts a wide variety of what might be considered to be 'garden birds'.

Our garden 'regulars' include the inevitable blackbirds, and we almost always have a robin or three. Chaffinches are common, and there is almost always a dunnock hopping about under the feeders. The tit family are represented by great tits, blue tits and coal tits.  We have a few house sparrows and an occasional starling and song thrush. This year, we have been seeing an increase in numbers of goldfinches and greenfinches, and siskins are also quite common visitors.

As for larger birds - two-tone hooded crows are always around - and tend to be more gregarious and bolder than their all-black southern cousins, and collared doves are visiting more often these days. . We occasionally get a glimpse of a sparrowhawk.

A short walk up the road takes one out of the gardens and into the moor. Here, the 'little brown jobs' are meadow pipits and sedge warblers, while buzzards and snipe are often seen - and heard - in the sky. I am sure there are other birds about, but I lack the skill to identify them. However - in spite of us being less than a mile from the sea, it is rare to see any seabirds here at Roskhill.

One last word goes to the Cuckoo. Since we moved here in 2008, we have learned to expect several cuckoos to start to 'sing' in April every year. They would then lay their eggs, and young cuckoos would be hatched, and would then depart in July. This year, 2017, just one cuckoo arrived in Roskhill, and sang for a week or so. This one bird seems now to have moved on. 2017 could be the first cockoo-less summer we have had here. What a tragedy it is, that man has had so much influence on the wildlife on our planet that such a familiar bird as the cuckoo is now risking extinction.

My fuzzy photos are of a few Roskhill birds - pictures taken through my double glazed study window.