They come along all too often. Sue had another birthday this week, and over the last several years, we seem to have developed a tradition of going somewhere that is new to us to celebrate.

For this year's birthday, as Sue had never set foot at John o' Groats, we chose to go to Caithness. We rented a cottage just a couple of metres above the sea shore in a fishing village 2 miles north of Wick. On our arrival - the weather was not great. Huge waves rolled in from the North Sea, blown by a fresh north easterly wind, and the temperature hovered just a few degrees above freezing.

But - we have the right kind of weather-wear, and Cupar is waterproof-ish, so off we trekked. We soon ticked-off the 'been there, done it' compulsory photo at John o' Groats. What a shame the iconic signpost has been vandalised and defaced by the attachment of hundreds of silly stickers deposited there by visitors. 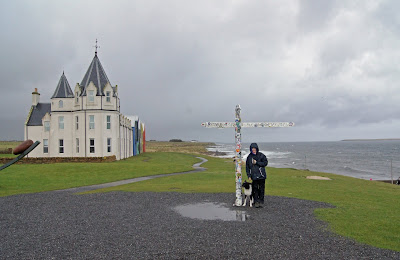 Quite nearby, is the much less visited but far more dramatic and scenic Duncansby Head, and its nearby massive sea stacks. For some reason, I did not have my camera with me for this expedition. Sue may post some of her photos later.

Then we trundled on to the most northerly place on the UK mainland. We were the only humans (and dog) to be there at the time. Wonderful! 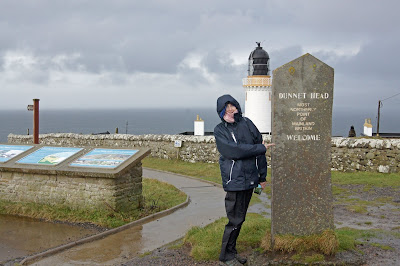 But Caithness is not all beauty. The landscape is mostly flat and tree-less. Fences, not hedges, line the roads and divide the fields. Most land is pasture for hundreds of sheep. The small towns of Wick and Thurso are lively enough, and are not suffering from closed shops and derelict high streets. However, the bulk of the housing for the local population is not pretty. Brown cement render is the finish of choice for most of the houses, and very few people attempt to nurture a garden. Out of the towns, and surprisingly - there are farms and houses everywhere. Many are derelict. Some are brand new. It is a weird mixture, and it is a bleak and featureless place to live. But the coastal scenery is just awesome, with castles (most ruined) sprinkled liberally along the cliffs, and for the serous archaeologist in you - you trip over standing stones, chambered cairns, stone rows, brochs and assorted other neolithic remains almost anywhere that you wander.

Here's a few more of my photos from our holiday...

Posted by Richard Dorrell at 3:21 pm No comments: