I think I mentioned that we were planning to put a new bath upstairs.
When it came to it, it seemed like a good idea to replace the toilet and wash basin as well.
This meant that part of a pine-panelled wall would have to be replaced because of a different location of the toilet cistern.
Then we had a good look at the floor, and thought that if we were doing all this work, we might as well retile the floor, which had a couple of cracked tiles.
So now that I have put up a new light fitting and replaced the inadquate heating, we are nearly ready to replace the bath......
Posted by Richard Dorrell at 3:21 pm No comments:

Sue here!  Now its MY turn......!
It was a lovely sunny day yesterday so Richard and I decided to take a trip out with the cameras up to the north west of the island visiting Feriniquarrie, Lower and Upper Milovaig, Glendale and finally Neist Point.......   Shafts of sunlight cut through the gathering clouds that hover over Loch Mor in the photograph below. Below is a shot of Richard as he's taking his own photographs just below the telecommunications masts at Scoval, (290 metres) close to Feriniquarrie.   Crikey - it was cold up there! 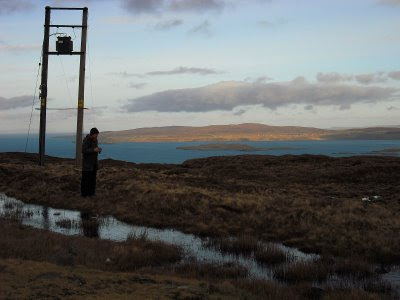 Despite the icy blasts we managed to get a lot of varied and interesting photographs but decided not to do the walk out to Neist Point (below) for fear of becoming 'airborne' in the gusting winds! 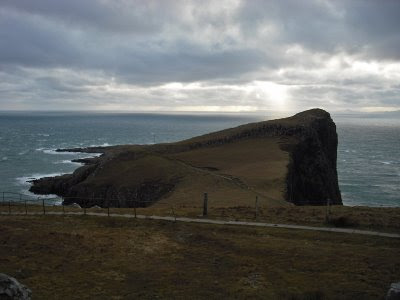 Below is the Memorial to the famous piping dynasty of MacCrimmons above Loch Dunvegan.  The amazing views were worth the trudge through the boggy, wet ground to get there! 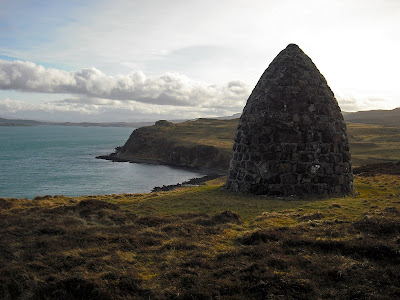 Skye - heaven on earth - at times!   I still have to pinch myself on occasions as a reminder that we do actually live here!!
Posted by Richard Dorrell at 7:00 pm 2 comments:

We are awaiting the arrival of a Scottish Tourist Board Quality Assurance inspector at the Barn today. We are being inspected as a B&B as well as self catering, so she is staying the night.
Our B&B arrangements mean that breakfast is prepared in our kitchen in the downstairs apartment, then served in the dining area of the upstairs apartment.  Now, the access to the upstairs apartment is via an outside staircase - fine when the weather is good, but in a 'Skye Breeze', it can be a challenge to get the toast upstairs without half of it blowing away over the roof...
So, think of us if it's windy in the morning!
Posted by Richard Dorrell at 12:52 pm 2 comments: 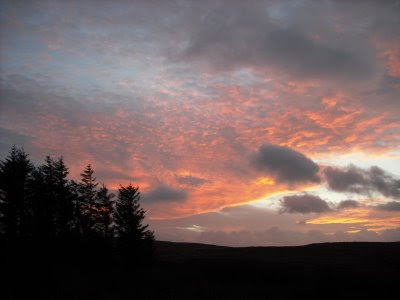 and this was yesterday... 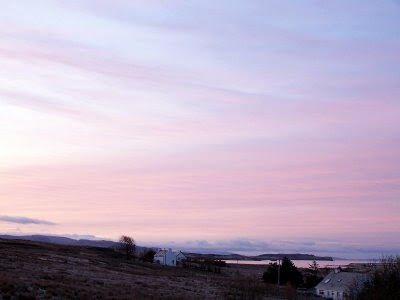 Sue has a camera!

Sue had a camera for Christmas.

We had wonderful weather today, so went up to Waternish to take some pictures. Here are a few of Sue's shots. 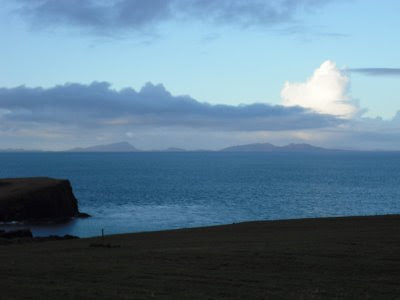 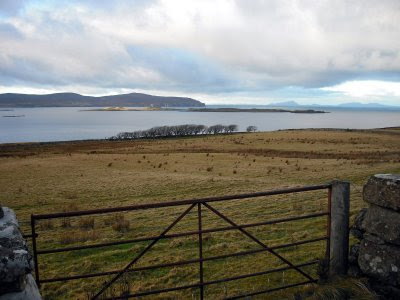 We have just joined a social communication website called Scotster - some of you might find it interesting, especially if you have links with Scotland (other than us!)

Scotster: the photo sharing and social site for Scotland
Posted by Richard Dorrell at 2:10 pm No comments:

Spooky - even in sunlight! 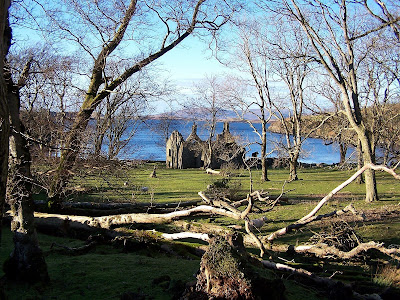 The ruin of Gesto House stands among witchy trees on the shore of Gesto Bay, Loch Harport.
The house, built about 1760, was the former home of the Macleods of Gesto, who were  the oldest cadet branch of the Macleods of Dunvegan, with whom they became involved in a long-running dispute. The rift was cemented in the mid-19th century, when the tack of Gesto was transferred to two Borders sheepfarmers. The Macleods, who had settled here in c.1425, never returned to Gesto, but a descendant, Kenneth Macleod, got his own back by buying up extensive properties in the north of Skye when the Macleods had to sell them in the later 19th century to meet debts.
Posted by Richard Dorrell at 6:42 pm No comments:

I am now back home on Skye after celebrating Christmas and New Year in .

Or it may have been the air – in Torquay the winter air is often damp with sea mist, and is scented with noxious particles of pollutants from all those engines, and all the central heating systems in all the houses. On Skye, the air is just air. Fuzzy lichen (in my picture below, taken yesterday in Dunvegan wood) is only able to grow in unpolluted air. 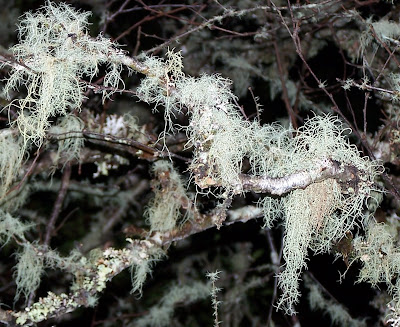 Posted by Richard Dorrell at 10:07 am No comments: