For the benefit of anyone planning a visit to Skye, or anyone else who is simply interested - I thought I'd attempt a thumbnail description of what Skye is actually like, starting from a wider perspective...

Skye is an island in the Inner Hebrides, and part of The Scottish Highlands and . The region is not densely populated. Only 4% of the population of  live in the entire Highlands ( total 5.3 million), though the Highlands occupy HALF the land area of . The west  are arguably more scenic, having many sea lochs as well as the islands and mountains. Inland, are vast areas of undisturbed moorland, freshwater lochs and more mountains. There aren't many roads, but the main roads have been upgraded over the years and are mostly two-way traffic now. There is a fine bridge connecting the  to the mainland.

In the Highlands, Inverness and   are the largest towns. They are both some 80 miles by road from the . Inverness (pop. 41,000) is a centre for retail trades supplying the entire Highlands, so there are many large warehouse type outlets selling everything needed for all the businesses and trades in the Highlands (tourism and sheep farming are the biggest industries here).  (pop. 10,000) is more of a tourist centre, but is not a specially attractive town. Both places have good public transport links to the rest of  (rail, bus, coach) andInverness has an airport too. 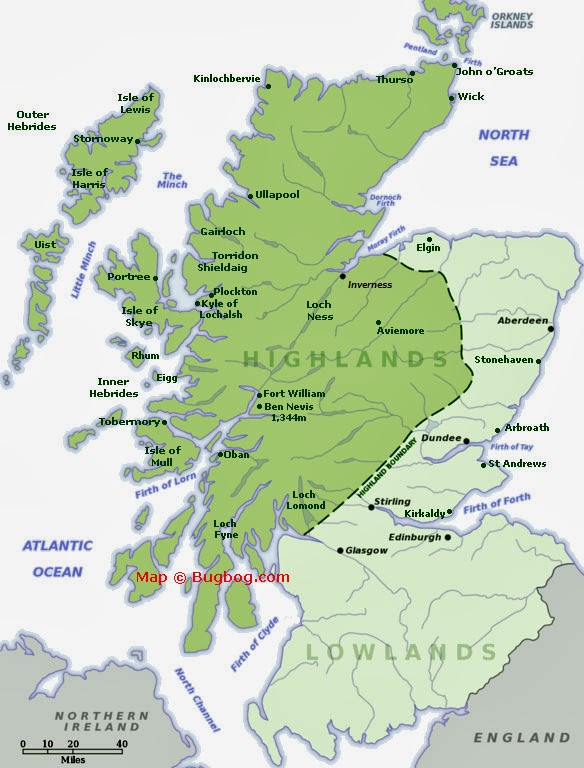 Skye is world-renowned as a holiday destination for many reasons....The island is bigger than many people realise, being about 50 miles long and 25 wide. It has so many scenic inlets and 'arms', you can see the sea from almost everywhere, and it would be a challenge to visit every corner of the island an a week, even if you drove all day every day. There is folk lore and history round every turn. The island is the ancestral home of both Clan MacDonald and Clan MacLeod. The complex geology of the island means the landscape and even the flora is different in different parts of the island. On the coast, there are towering cliffs (more than 1000 feet in places), rocky shores and sandy bays. Inland is mostly hilly heather moorland, with the dramatic bare-rock Cuillin mountains visible from just about all over the island. Considering how far north we are (latitude 57 degrees north - the Arctic Circle is 66 degrees) the climate is gentle - summer daytime temperatures often reach 17-18C (mid-60s F), winter nights seldom drop much below freezing (on the coast). But we get a lot of rain and strong winds, especially in winter. We have unpolluted air, dark night skies (can't believe the number of stars you can see) and a quality of daylight that has to be experienced to understand. We have a wide variety of wildlife - Golden eagles, Sea eagles, Otters, Whales, Dolphins, Basking sharks, Red deer, huge seabird colonies.....
.... I could go on, but you begin get the picture - there is a lot to see on Skye. 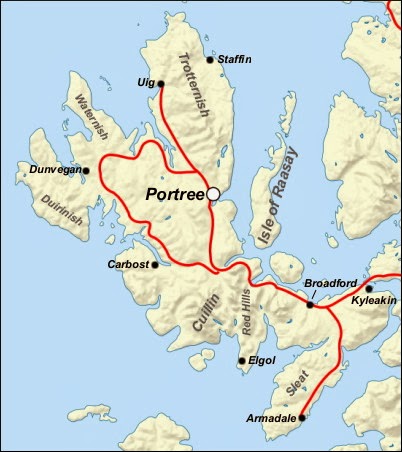 According to the 2011 census, around 10,000 people live on Skye. This is an increase of 8% since the 2001 census. But we are an aging population - the number of children aged 0-15 living on Skye is predicted to fall by 32% by 2035. Traditionally, agriculture brought the main income, first cattle, latterly sheep. But today, tourism and all its associated trades is the chief employer. There's virtually no crime. The cost of housing is higher on Skye than on the  mainland, but the influx of many thousands of tourists every summer means that, on the whole, we have a reasonable infrastructure of services. Whereas mainland villages may offer slightly cheaper housing, they may be many, many miles from the nearest shop or medical centre. Public transport here is poor, however. Getting about requires a car. The general cost of living (food, fuel, etc) is much the same as anywhere in the Highlands, but higher than in lowland  or most of .

If you find the above interesting, maybe it's time you planned a visit...!
Posted by Richard Dorrell at 6:28 pm No comments:

The Barn allotment is not attached to the garden of the Barn, but is located just across a the narrow road which serves the five houses in this part of Roskhill. The land lies between the road and the River Roskhill, which flows in a virtually sheer-sided 10-metre deep gorge just here. The plot used to belong to a bungalow on the other side of the road, but was not being used, and we were lucky enough to be able to buy the unused land. We didn’t just buy the once-cultivated part of the plot, but also took over a large triangle of land which includes the tree-lined river bank, and a completely overgrown area, thick with gorse, wild raspberries (which don’t fruit) and other unwanted growth.

The allotment was separated from the wild area by a very tired chain link fence which appears to have been put there to keep rabbits at bay, though thankfully, I haven’t spotted a bunny in the garden since we have lived here. I have to admit to having largely ignored the wild area for the three or four years I have been gardening over there, but the raspberries, and now some bracken have been spreading into the vegetable beds, so I decided it was time to take some action.

Late last summer, I treated the whole area with a herbicide, in the hope of reducing some of the unwanted growth. Then, the other day, I fitted a brushcutter blade to my strimmer and hacked through what was still standing of the straggly vegetation, and also took out a few vigorous alder trees which were growing at the top of the edge of the gorge. We know from past years that there are hundreds of daffodils and bluebells in the area, so I will hope to encourage them, but plan to keep down the unwanted stuff. I have also planted a few baby trees (two larch, a spruce and a scots pine, all rescued from the sides of forest tracks). These have been placed to add to existing riverbank vegetation, and will not cast shade on the allotment – though it will take them a few years to cast any shade anywhere…!

Posted by Richard Dorrell at 1:29 pm No comments:

It's wind-driven rain against the windows again tonight. But at least we do not have to worry here about being flooded. Other than a couple of wayward wheelie bins, we have had no damage here. My heart goes out to the people across the UK whose homes and businesses have suffered in this winter's storms.

But it's not all doom and gloom - I have today posted some recent photos of Plockton (on the mainland a few miles from Skye) on my "Skye In Pictures" blog  - click here! .  And 2014 cottage bookings are coming in quite quickly now - Skye really is a sensational destination for a holiday!

(ps  - our holiday cottage website links are in the column on the right).
Posted by Richard Dorrell at 9:35 pm No comments: